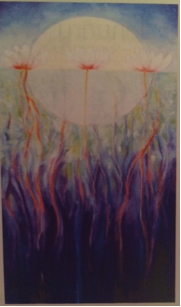 It took place in a Somalia-like place of anarchy where “bad guys” would arbitrarily kill us “good guy” tourists who were trying to get to the airport to escape. All around me were maniacs with guns and with a different kind of weapon who were arbitrarily killing people trying to escape. The different kind of weapon was shaped like an old flintlock gun that had two stages. The first stage shot out a combustible fluid and the second stage sparked causing the doused person to ignite. This was what was occurring all around me.

In defense, I took up one of the flintlock guns and battled my way to the airport, igniting people along the way. But it wasn’t done anonymously. These were people who, as they approached, I evaluated to be bad and worthy of dying a slow, horrible death. I felt badly that I did what I did, and yet not badly because I had deemed them not good people who were blocking my survival. I could go on and on (which the dream seemed to), but you get the idea.

When I awoke at around 6:00 this morning, I pondered, “What the heck just happened?” The first place I went was to review if I had read or seen something violent (e.g. “Bazooka Death March VII”) the night before. Nope. Then, what had I done?

Yesterday, I downloaded all of the essays from Tom Kenyon’s Hathors website (tomkenyon.com) and read the most recent two in bed right before going to sleep. One of the essays, (tomkenyon.com/orchidium), dealt with how we have entered a period of deep spiritual chaos that will accelerate whatever it is we and the planet are dealing with. If, for example, I have anger issues, then anger triggers will increasingly show up.

This made me think about the lack of a coincidence between my reading this essay and the dream. Think about it: the flintlocks had two stages. The first stage was to evaluate the person being doused and the second stage was to determine that they were unworthy enough to strike the flint. The whole thing was a metaphor for being judgmental, which is one of my core issues.

In being judgmental there are two stages for me. The first is to deem that the “offender” has done something worthy of my judging them. The second is for me to write them off, make them cease to exist to me.

In Kenyon’s essay the Hathors propose a mind-bending concept: that the appearance of our weaknesses and our lapsing into them is actually what we need to do in order to heal them. It is the lapsing that opens the pathway to the lesson, not the avoidance of the lapse. This isn’t a process for sissies, obviously, for it means we need to go into those dark places that, for me at least, cause remorse and self-recrimination (there I go again).

Thanks for being there.

P.S. Yay! This dream must mean I am no longer judgmental.

P.P.S. Darn! The P.S. must mean I am still judgmental

I’m sure we’ve all have touched upon a feeling of disconnection and chaos in our lives lately and perhaps this offers another perspective. If it doesn’t resonate, delete it or leave it aside and come back to it another time.

Let’s start with a bit of symbolism first: AIRPORT.

When we are dreaming of going to an airport, being at an airport, or getting our tickets and trying to board a plane but we can’t because something prevents us from getting there, this signifies we are in a transition stage in our life: that we are ready to move from one level of consciousness to another but somehow feel stuck. The dream tells us what is keeping us from moving forward. The dream alerts you, says, ok you are really ready to make this shift, you’ve been doing a great job, but you keep tripping up on one or two things. If you can release “X” then you are able to make the leap and open the power of your soul, really let it come forward and take you to the next level.

Judgment- yes, Anger – yes, but these are components of something bigger-the illusion of duality- and how you cling to that illusion in your life. And for you, as with all of us, it is the universal myth of good versus evil in regards to the Self, the shadow and the light. And since you were listening to the Hathors the night before, it makes sense that you would be shown this. These enlightened beings are reminding us that duality is an illusion we create — so we can un-create it.

Guns are not just about aggression and the male aspects of the Divine: true, there is anger, violence, fire and fury; and of course, the sexual overtones around the gun, engaging in the male attributes of dominance in getting to the airport. So in your life right now, how often do you rely on the male intellect, taking action, moving forward at all costs? How often do you rely on the feminine attributes of patience and allowing the situation to come together, while holding love and light around it, not holding a desire for changing it, influencing the outcome?

Even the focus on the two (2) mechanisms of the gun illustrates how anger and judgment compose your sense of dualism: your shadow and your light. So I’d ask you to consider-

What dwells in your shadow that you’ve been looking at that still makes you uncomfortable with anger and judgment: are you unhappy they are still part of your being?

Are you trying desperately to annihilate them, as you perceive they are the bad guys?

Could it be that this version of reality, trying to kill off anger and judgment within you, only furthers these energies with your soul?

Is there frustration, “gosh, how am I ever going to get rid of these energies?’ What if you dropped the context and simply accepted them? Accepted the shadow as you do the light? What would your reality look like then and could you accept that?

I’d have you consider the thoughts that run through your head these days: the situations you are dealing with at work, at home, with friends. I’d look for thoughts or traces of belief that there is ‘right and wrong’, ‘them versus us’, and how you have to ‘defend what you believe is right’. It’s this illusion that we are separate, that this division exists, that prevents you from getting to the airport and on that plane: from shifting to the next part of your journey.

Knowing this, feeling this, can lead to a space of asking yourself- So can I allow this version of reality to drop away? Can I notice and be aware of what the final pieces are that keep me separate from “them, the undeserving, those who are wrong”.

Start within yourself. List what you see as a weakness in your self, investigate whether the weakness may also be linked to your perception of divine feminine (after all, you dreamt about guns and fire) and sit with that. Eventually you’ll get to the place where you will see we all have these weaknesses and those you consider ‘them or the other’ won’t be judged, or seen as foreign, or hated, or even your enemy. The ability to love those aspects of your self, to send them compassion, to bring them into the Light, will allow the false division to fade away. No more killing off aspects of you, no more thinking you are separate from anyone else, and eventually, no more duality, in any shape or form.

This isn’t work for sissies as you say, that time is over! Now the work is heavy, or rather feels heavy, because we are finally facing fear, anger, judgment, envy, greed, the thought of not enough, head on. The last mile of the race, of the journey, is always the hardest.

I admire the Hathors in their willingness to take us to the depths of our fears, to our raw emotions, asking us to sit with them and NOT obliterate, push through, manage, or ignore these heavy emotions. In my own journey as a medium, working with Spiritist’s texts, I too have been guided to be present and to stay with heavy emotions. To sit with one’s fear is an opportunity to shed, to let go and finally settle into our immense capacity to love our selves, our light and our shadow. In opening up to love we are open our personal Pandora’s box. The energy that comes to our rescue is the love that will heal us, and our world. But we have to start with our own inner war and turmoil– Our own personal story of false duality.

Sometimes the Hathor meditations are too intense. Even the Orchidium meditation (http://tomkenyon.com/orchidium) can open a path to fear, especially that image of the piston driving directly into the heart of the flower (talk about male dominance). I understand their metaphor of the umbilical cord and the Divine Mother but I find it’s one step too many. Newbies to this kind of meditation get stuck on the form and if frustration kicks in, fear enters as well.

I find that it’s more soothing and loving, and gets us to the same place, to sit and transfigure, as we do in shamanism. Going to the Light with all our fears and then opening to release and become the Light- that’s healing. And when we finally take solid form again, we have transmuted all that we no longer need because we allowed the shadow to come forth and then we experience only the Light, because there is really only the Light.

So when we return to the original divine state (of non-duality) and get into our bodies once more, we receive the benefits in our physical form: it gives us the power to get into the cycle all over again. So since you can transfigure, it may be helpful to do both- try it and see how it goes.

You have Successfully Subscribed!

By visiting this website, scheduling a consultation or appointment, and or booking a session with Healing Channels /Rosa Haritos PhD, you understand and agree that Rosa Haritos PhD is a medical sociologist, healing medium, shamanic practitioner, but not a physician, psychotherapist, or other licensed professional. Her advice, healing sessions, workshops, are offered to supplement Western and Traditional medical protocols. Please consult your physician or other licensed health care professional for any physical or psychological conditions you may be experiencing.

You have Successfully Subscribed!